Last night could not have been more perfect: a temperate breeze off the water, birds out there calling I love you, I love you into the dark, the smell of camp smoke, the moon as bright as day and the homey ropes of white fairy lights strung up into the scrub trees by the campers in the popup next to our tent.

Last night could not have been more perfect except for the pervasive insomnia I can’t shake. I laid there for hours in the dark, listening to the birds, then M sleeping a few feet away, and then M’s soft snoring, which only made tired me turn into angry and depressed me. I tried every trick in my insomnia repertoire, changing positions, shoving earplugs in my head, counting, telling stories to myself, but just at the edge of sleep, something would jolt me awake again.

Desperate and annoyed, I grabbed a pillow and jumped into the Jeep, reclined the seat halfway and tangled my body into an impossible position with my feet in the driver’s seat and my trunk in the passenger seat and my arms wrapped around a pillow. It wasn’t comfortable, but it was quiet. I thought, Yes! It is going to happen now! Then a park ranger came through and slapped a note on the windshield of the Jeep, and that was all she wrote.

At 6am, knowing it was a lost cause and just relieved the sun was up, I strapped on my shoes, grabbed my camera and a bag and walked down to the water. The beaches of Fort Pickens were glistening and white; the water was a bright aquamarine (that’s just blue for the less sophisticated) and the surf was gentle. Scrub jays and red wing black birds were making a clatter, and for five minutes, on the water’s edge, I felt at peace. 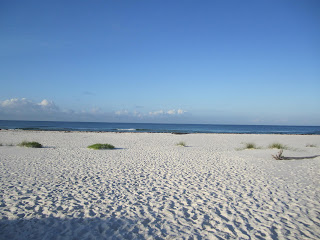 For a few minutes, I was alone. Then one of the camp dads came clacketing through with a roller cart and beach gear to set up a nice colorful real-to-life Corona commercial on the beach. “You save some water for the rest of us?” He asked in a deep drawl. “A little,” I said. He smiled, and I said to myself: Self, make this a great day! It doesn’t matter how tired you are! You can do it!

I went back to camp, and changed into a suit. M did, too, and we ran down to the surf. Woot! I thought, Okay, I’m tired, but this is great! Great day, here I come! It’s just like a Jimmy Buffet song. This is paradise, and I am a cheeseburger. 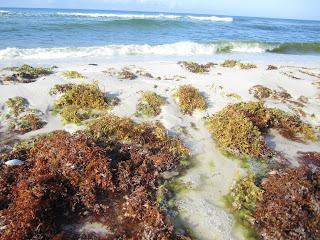 After slathering on a whole lot of sunscreen, and taking off my glasses and flip flops, I walked down to the water. But something was wrong. There were all these little ooey-gooey pink blobs all over the shore. Without my glasses, I could only see the bigger blobs. M told me the water looked like a stew when the waves broke. Stinging Jellyfish Stew. That sounds like something you would pay a lot of money for in some fancy restaurant in North Oakland, but when you are really tired, and you just want to go swimming, it feels like the sound: Wha! Wha! playing after a big fail.

When I did put on my glasses, I saw that the stew for myself and then I noticed kabillions of human plastic leavings, bottle tops, tampon applicators, spoons, condoms and cigarette butts in the dainty lacework of the seaweed on the shoreline. It was sad. Lesson learned: Never wear glasses. Always wear sunscreen.

After this terrible disappointment, M and I drove up to Fort Pickens, and that was pretty cool. The fort was built by slaves and during the civil war, held by the North, much to the ire of the Confederates. It was all vast and tunnelly and according to the volunteer manning the gift shop it was totally haunted. After hearing his stories, I wanted to go back and look for the ghost of Manassas the dog, but we had to move on.

Before heading out of town, M and I stopped at a beachwear shop in Pensacola Beach proper where all of the workers were beautiful Russian women. Yes, folks, there is a place where the 80s are still alive and well. Actually, I think beach towns just are the 80s forever, salt water taffy, I’m with drunky t-shirts, nipple mugs and all.

As much as I love basking in the glow of a bygone era, it was time for us to move on. New Orleans is only about two hundred miles from Pensacola, but to get there, you travel through four states: Florida, Alabama, Mississippi, and Louisiana. We had coffee in all four states because the Welcome centers in each one offered it for free. The lesson here is such: free coffee doesn’t taste all that good, but people are eager to give it to you, and free coffee makes you pee just as often as coffee you buy with money, which necessitates a stop in consecutive welcome centers along the Gulf Coast.

Facts:
Mobile, AL surprised me in its beauty. It was an absolutely lovely city to drive into.
Mississippi’s welcome centers are stately and look like mini-plantations.
People in the South are the most aggressive drivers.
Posted by Sarah at 8:04 PM